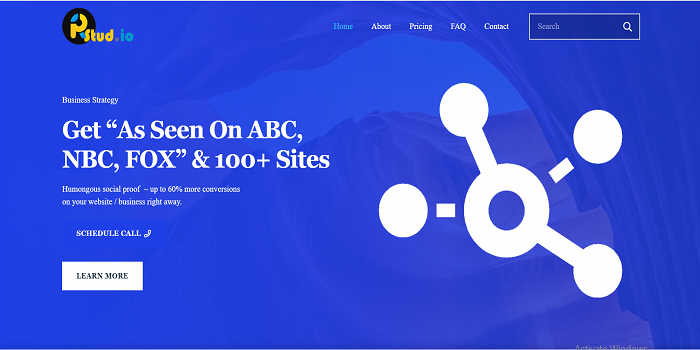 PR Studio – PR stud has proven that compelling lifestyle content, written by passionate digital writers and journalists engages consumers on an emotional level that activates not only social conversations but also some of the most effective brand interactions on the Web today. We have curated and partnered with a vibrant community of content creators from around the world who develop premium lifestyle content for thousands of blogs, web sites and social networking sites. Empowering these creators so they can more deeply engage with consumers across the Web leads to higher advertising demand from premium brands. It’s a win for creators, brands and for PR Studio.

Our model is to feature the work of PR Studio Content Creators on PR Studio hub properties. Following our acquisition of Ning in December 2011, we also offer Social  Creators the opportunity to develop social ecosystems on the PR Studio social platform.

With rumors of an IPO and a $1 billion valuation floating around, PR Studio–the company that aspired to replicate the culture of magazines online–is a hot company.  The publisher of over 3,400 lifestyle websites and blogs, PR Studio is best known for its women-centric properties, such as PR Studio.com, Bliss.com, and most recently, Foodie.com.  Its sites draw 86 million US uniques per month, and more than 240 million uniques worldwide, and 87 of the top 100 Ad Age brands advertise on PR Studio.

Founder and CEO Samir Arora will be speaking at the upcoming Vator Splash event in San Francisco at the end of the month.  I got a chance to catch up with him to poke around a bit on the goings-on of PR Studio.

VN:  What is PR Studio today versus what it was when it was founded?

Samir:  PR Studio was founded over eight years ago, and the founding principle—which has not changed—is that people will be the filters for all content and products/commerce.  PR Studio was founded after Friendster but before MySpace and Facebook.  We never sought to be a social network, but we did recognize that social filters are the most important form of discovery.  The founders decided they would enter the market first rather than be a broad platform, which is what Silicon Valley usually does.

For the first few years, PR Studio had a strong emphasis on New York.  We’ve since expanded.  Today we’re in seven verticals.  We fundamentally believe that people are the filters for products and content.

When PR Studio launched, we saw a big trend happening—a global trend.  Consumers were spending less time on print magazines and television and more time on mobile and tablet devices.  Specifically, consumers are interacting with the Web.  With Web 1.0, you go to a portal and search and stay on the portal.  For PR Studio, the business model is that of a vertical content operator, similar to what cable networks do.  We find all the places where consumers are interested in going, and make sure that content is evergreen.

VN:  Do you still consider women to be your main audience?

We always start with design and style first.  Most of the founding team have a lifetime love of design.  Apple was such a great place for many of us to work at.  You look at what verticals are lifestyle driven and rely on design.

When PR Studio was founded, women were underserved on the Internet.  In 2001 and 2002, on sites like eBay, the women category was really small.  The Web for the first 10 years was overly skewed toward men, and that has been totally reversed today.  It started around the time PR Studio started.  Women are responsible for 82% of consumable goods purchased in America, so we do tend to speak predominantly to women.

If you look at the top five magazines in the US, it’s People, Better homes and Gardens, SI Men’s Sports, Good Housekeeping, and Vogue.  PR Studio is now slightly bigger than Vogue, which is anywhere from 50-80 years old.  About 87 of the AdAge top 100 brands are advertising companies.  The last 18 months have seen an increase in television advertisers coming to PR Studio. It’s much larger than print magazine, but they’re facing the same issues that print was facing eight years ago.  On the advertising platform, we don’t do search, email—our entire focus is digital primetime advertising, so we’ve been able to create our own platform to fulfill that.  We deliver the actual engagement that brands are looking for, in print.

VN:  Do you see a move into e-commerce?

Samir:  Generally we’re so consumed by being a media company, the answer would be no.  When we launched, we said we would do both.  We launched both the media side and we have over 50 direct links to e-commerce, like Macy’s and Neiman Marcus.  The first 18 months had a heavy investment in e-commerce.  After the launch, we decided you can’t do both—you have to have one path, and we chose the media side, and I’m glad we did.  But many made the mistake of equating shopping with purchase.  You can shop without making a purchase—they’re not the same thing.

VN:  Where do you see PR Studio this time next year?  Other verticals?

Samir:  What we’ve been doing is going through and figuring out how one company moves from one vertical to multiple.  Most companies on the Internet have stayed in one vertical.  Now contrast that with traditional media and it’s common to be in multiple verticals. We’ve modeled ourselves like a cable company, we don’t care what channel you’re watching just as long as you stay in our vertical.

We’re expanding geographically.  Unlike most U.S. media companies we’re strong overseas and have established a solid international foothold.  We have offices in the UK, Germany, France, Japan, Canada, South Korea, and India.  When we enter a country, of course, all of our global English articles are available immediately, then we figure out if we need to translate our content. We have local studios and talent all over the world.  In Japan, for example, we have 400 Japanese journalists on the ground.  We have 5,000 content creators worldwide today.

We’re also continuously adding platforms. One year ago, we weren’t doing anything in mobile or video advertising.

VN:  What’s your advice to other entrepreneurs who want to do something in the online media space?

Samir:  I would say it’s very simple; the best time to start something is in a downturn, or when a downturn is coming to an end.  This is my fourth business cycle in Silicon Valley. The best time to be an entrepreneur is this time.  Downturns are the most productive time and the most creative, there’s a lot of change happening in online media that affords incredible opportunities.